Albert Bierstadt is a German born artist that moved to America in the late 1850’s. He studied art at the Dusseldorf School in Germany. When he moved to America, he joined an overlay expedition (exploring the West) that no doubt has inspired much of his art. During his travels he took many pictures and drew many sketches of the landscape of the West. Bierstadt was a part of the Hudson River School (group of painters with similar styles) and the Rocky Mountain School (art of Western landscapes). His most famous works are those of the Yosemite Valley. His work has been featured in numerous museums throughout America.

Bierstadt’s style of art captured the rugged, unexplored West with lots of detail and light. He painted using oil paints on large canvases. His paintings exhibited a humanistic side featuring dramatic effects, mood, romanticism, and bright colors. Bierstadt used a variety of landscape elements such as the rugged mountains, abundant vegetation, fog, mist, and clouds. One of his more well-known paintings, Among the Sierra Nevada, best showcases his artistic style. The forefront of the painting features green, lush vegetation with the wildlife of that landscape. The middleground features the rugged, dark Sierra Nevada mountains. The background is a contrast to the dark mountains and vegetation. It showcases bright light and lots of white clouds. 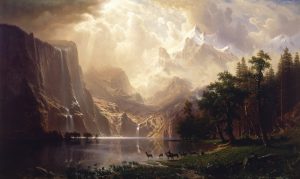 His paintings became known all over the world. His works were part of both public and private collections. After he died in 1902, people seemed to have forgotten about his work until the 1960’s. During the 1960’s people became aware of the need to preserve the natural landscape and Bierstadt’s work came back into popularity. He has completed over 500 pieces of work, many are still featured in museums around America. His legacy remains a part of the West and there is a mountain in Colorado named in his honor. Check out his works along with other Hudson River School artists at the Wichita Art Museum.