William Trost Richards (June 3, 1833 – April 17, 1905) is one of the featured artists in our latest exhibit The Poetry of Nature: Hudson River School Landscapes from the New-York Historical Society.

Aside from the interesting fact that no one online can seem to agree on the date or location of his death, Richards was unique in that he almost exclusively painted marine watercolors. He was also a bit of a rebel in that he rejected the romanticized and stylized approach of other Hudson River painters, opting for a meticulous no-frills approach which more accurately reflected reality. An example of one of Richards’ marine watercolors, Lands End – New Jersey Coast, is shown below. 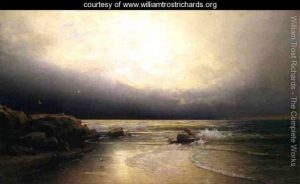 As you can see, Richards’ work was certainly closer in resemblance to an old photograph than a watercolor painting. His style departure from other notable Hudson River School painters is likely a result of his affiliation with the Association of the Advancement of Truth in Art, which he joined in 1863. An American Pre-Raphaelite group, the association believed that spiritual insight could be gained from painting art that is true to the raw, natural forms observed in outdoor scenery.

Despite his dedication to painting realistic watercolors of American landscapes, Richards was also apparently a huge fan of Europe. He made it a point to travel there every year until his death, visiting England, Scotland and Norway.

To see some of William Trost Richards’ famous marine watercolor paintings, you can visit the Wichita Art Museum’s latest exhibit The Poetry of Nature: Hudson River School Landscapes from the New-York Historical Society.